Microsoft is launching a new Surface Pro today, and it’s dropping its numbering scheme as a result. While many were expecting a Surface Pro 5, Microsoft’s new tablet / laptop hybrid is simply the Surface Pro from now on. At first glance, the new Surface Pro looks a lot like the old Surface Pro 4, but it’s the inside that counts this time. “It’s a meaningful change,” explains Microsoft’s Surface chief, Panos Panay, in an interview with The Verge. “There are about 800 new custom parts in the new Pro.” 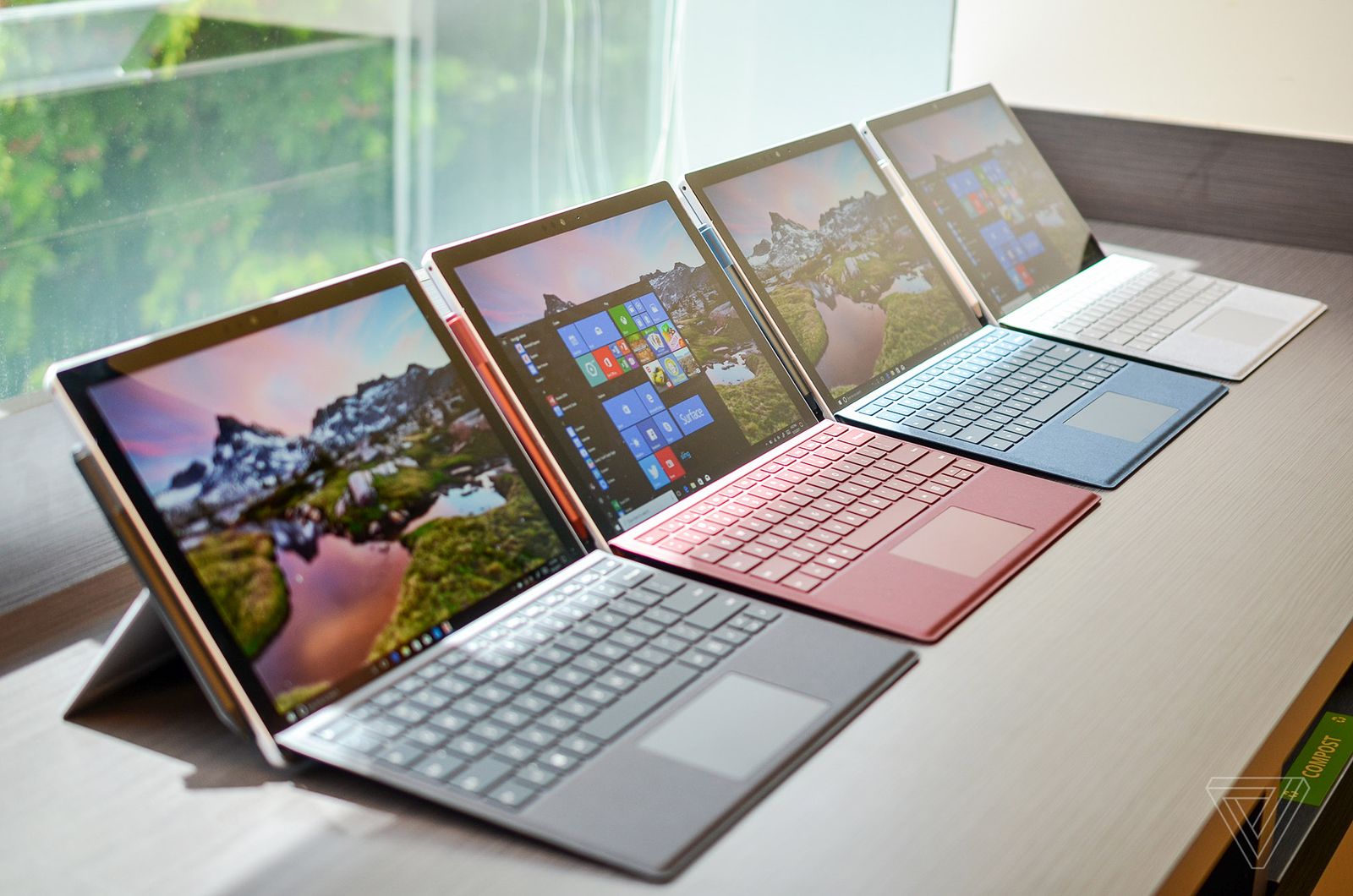 Article and Photos by Tom Warren from The Verge

In photos, it’s hard to show exactly what’s changed with the new Surface Pro, but there are some subtle differences. The perimeter vent has shrunk a little around the device so it’s no longer so noticeable, and the device has rounded edges that make it feel better when you’re holding it as a tablet. While the Core m3 and Core i7 models are the same weight, the Core i5 has dropped a tiny bit of weight. It’s not noticeable at all, and it largely looks and feels like the Surface Pro 4.

Other subtle changes include a new hinge design. Microsoft has adopted the same Surface Studio 165-degree angle for the Surface Pro, allowing it to lay nearly flat. The hinge no longer snaps (for safety) if you push it too far, and Microsoft is confident the hinge won’t break if you lean on it too much. Microsoft’s Surface hinges have been sturdy in the past, so that’s a claim that’s easy to believe. 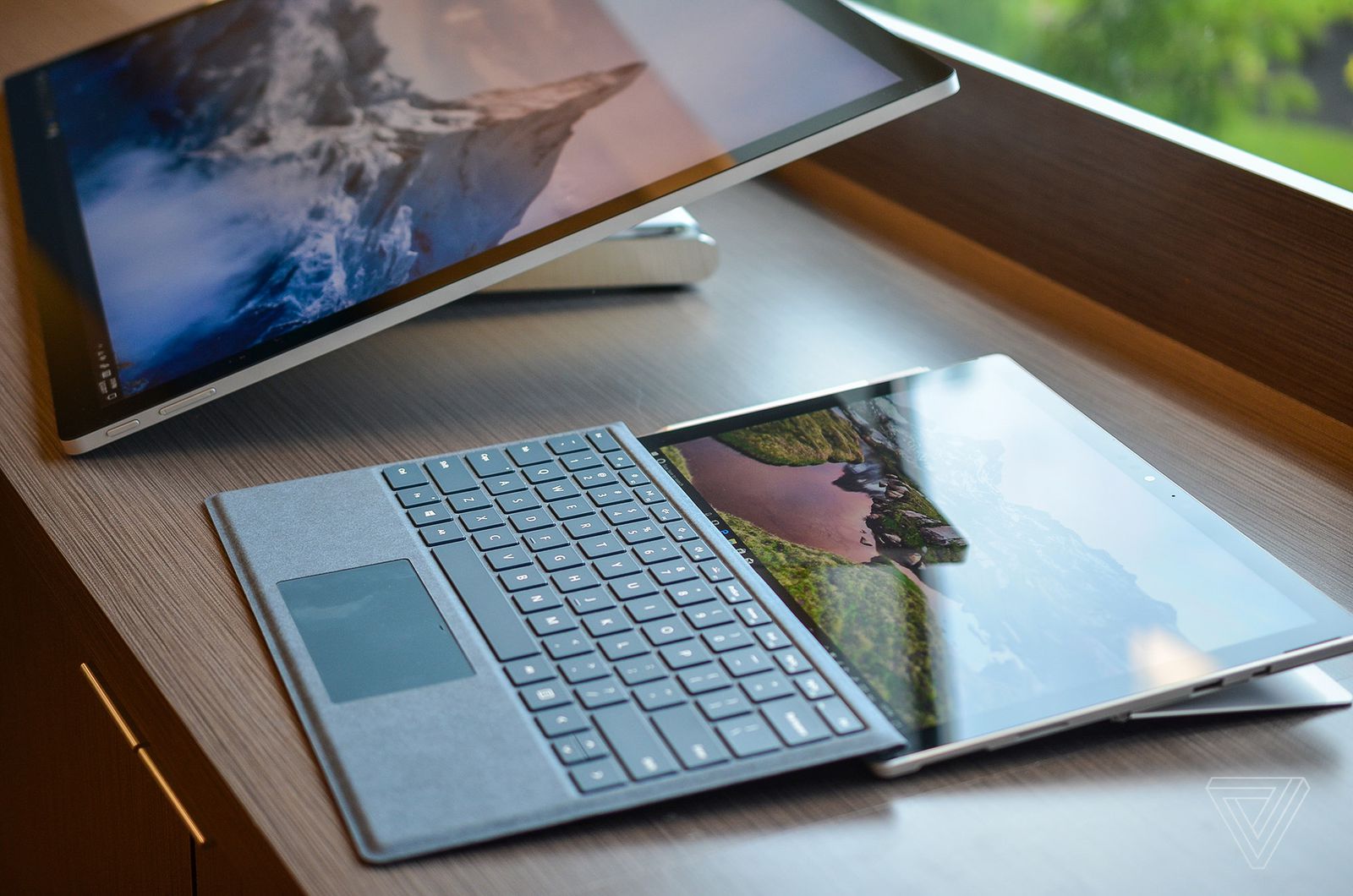 One of the biggest changes to the Surface Pro is a new Surface Pen. It doesn’t come in the box anymore, so you’ll be able to purchase it separately. While it will work on existing devices, a new tilt functionality is only available on the Surface Pro for now. Tilt will detect the angle of the pen to enable shading and better accuracy for inking. It’s something that creators who use Wacom tablets have been asking for, and Microsoft is finally delivering.

Microsoft has also altered the level of pressure sensitivity to 4096, alongside a reduction in the activation force. Inking now feels a lot less laggy and way more responsive on the Surface Pro. Even the Pen itself feels a little more refined, and Microsoft has removed the clip at the top of the device. We’ll have to see what creatives think, but it feels like a big improvement. “Right when you put the pen down, depending on how far you push, it’s like a ballpoint pen at this point,” says Panay.

For the first time on the Surface Pro, Microsoft will also offer a model with LTE connectivity. The LTE version will support micro SIM and eSIM, and will be priced slightly higher than models without LTE support. Microsoft isn’t revealing exact pricing or a release date, or even what processor will power the Surface Pro with LTE. It’s possible that Microsoft could opt for an ARM-powered Surface. LTE versions should be available later this year.

Microsoft’s Surface Pro devices are the most popular in the company’s range, with some estimates suggesting more than 70 percent of all Surface devices in the US are Surface Pro. That makes this refresh an important one for Microsoft’s Surface effort. “I believe it will be the fastest adopted Pro we’ve ever shipped,” claims Panay. “There’s a reason for that, the brand is here and there’s people who have been waiting for it, and it turns out it’s just a kick-ass device.”